Its just after one o’clock and I’ve just secured a table at the Stronlossit Inn, which is located on the edge of the ghost village that is Roybridge, killing a rather ludicrous amount of time before catching the train back to Edinburgh at six tonight. I suppose I should be thankful that this place is actually open, the hotel down the road doesn’t unlock its doors until 4pm, which left me wild eyed for a minute, as it is raining hard, stupidly hard. I have to admit that I have just come from the cafe at the back of the local shop, but the relentless sound of a large refrigeration unit by the till, seriously started to fray my nerves in the time it took to swallow down a much needed, but rather disappointing cappuccino. So how did I end up in this predicament? Well, it goes something like this.

Over the summer I have been itching to get away, but for one reason or another there has continually been something waylaying me. And I am now aware, as if I wasn’t before, that the time commitment required to fulfil the expectations of your significant other, can seriously eat into your free time. Having spent the whole of July quietly resenting a succession of Facebook friends posting pictures of the highlands, basking in beautiful sunshine, I was eyeing an opportunity to head off on, well let’s not beat about the bush here, ‘a solo trip’, when a gift wrapped justification dropped into my inbox. The editor of www.ukhillwalking.com had mailed me to say *blush* how he loved the concept of bothiesonabike, and would I like to write an article for his website. Well once I’d got over the hillwalkingness of the site – there was a mountain bike forum for a start – and realised of course, that the bottom line is that its all about being out in the hills in one way or another, I jumped at the chance. The immediate thought was that maybe I would have to do some ‘research’, especially after we had settled on what appeared to be a straight forward summary of the pick of the best bothies to get to on a bike. I must admit I did also suggest that I include an overarching piece incorporating the philosophical motivations of the project, and the progress so far, but that was gently vetoed. Fair enough I suppose.

Now there is of course, a long list of bothies that you can get to by bike, and whittling down a definitive list took a little more time than I thought it would. However, once I resolved that to keep in the spirit and ethos of the blog I should concentrate on bothies that you can easily get to by a convenient railway station, this narrowed down the list to a much more clear cut number. And yes, it meant that I would have go out and cycle in to three possible contenders, as I hadn’t been back to them for a while, and also one other bothy that was on my now tantalisingly short list of places I have yet to visit. So there was the cast iron excuse I needed to hang out for the next weather window, and get back out on the bike. It was for work purposes, of course it was.

So last Sunday I found myself bundling the bike onto the train from Waverley Station, heavily laden with extra food, on the promise of a positive three day forecast and a cunning plan. First stop was Cadderlie bothy on the western shore of Loch Etive, which is easily accessible from Connel Bridge. Once you’re through the quarry at the end of the road beyond Bonawe, it is all very straight forward, though I cycled a little more gingerly than I remembered doing last year. In review I was probably a bit more blase then, or maybe just more relaxed. Who knows. Anyway the weather lived up to its billing, and I got some pretty good photos for the article.

Would you believe it, weekend guardian left by the previous occupants

Almost didn’t make it down to the loch side to take photos of the gloaming, but very glad I did

and up for the dawn… 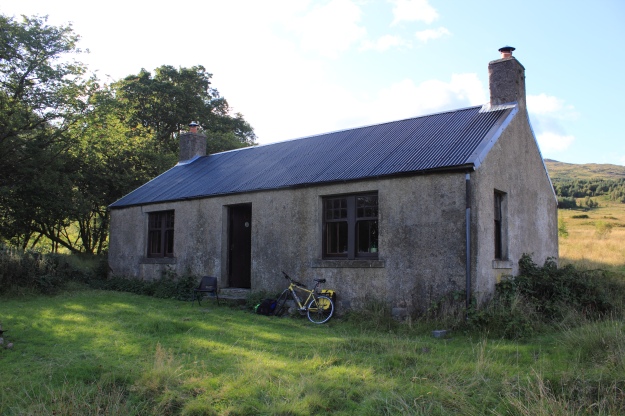 Then it was on to another possible non MBA gem, on a list of which I have to admit, I have so far kept under my hat in the blog. Corriarach in Cona Glen, is a natural stopping off point on day one of the extended start of the Cape Wrath Trail. This route takes you south from the ferry drop off point at Camusnanagual, and three sides round a square back to Glen Finnan, instead of heading straight there along the south bank of Loch Eil. After puffing my way up the simply wonderful cycle way from Barcaldine to Ballachluish, which is actually tarmacked most of the way, I crossed Loch Linne on the Corran Ferry, and meandered along the road to the start of the track up Cona Glen, at Inverscaddle.

Welcome break on the Oban to Ballachluish cycle path, with a view across Loch Linne

I was still really psyched, but more than a little tired, having been up since six getting photos of the dawn. I also had a bit of a disconnect about the possibility that the information I’d gleaned could be a false lead. So off I went up the track with a last surge of optimism, and spent a rather laborious forty five minutes picking my way through the stones and type 2 gravel, before the bothy came into view. And sure enough it was locked. Locked. Newly refurbished and locked. Yes locked. Bollocks. I did do a precursory search for a key but to no avail, and I think it was the first real bothy low I’ve ever experienced. 7 o’clock in the evening, knackered, five miles up a lonely glen, with a hint of rain in the air, and my bothy for the night had rejected me.

Now I am building this up a little, because being a rather conservative traveller, and a person who normally has an unhinged pre-occupation with worse case scenario planning, I had bought my tent. Not any of that light weight one man nonsense either, but my full fat wild country quasar which weighs in at a cool 4.5 kilos. If I’d been more strategic, I’d have just camped much closer to the road and paid a visit to the bothy in the morning. But that’s not how I roll…Anyway, I found a good spot to pitch the tent about a mile back from the bothy, and spent a bit of time chopping vegetables and cooking up some noodles. While sipping a glass of wine. Bothy or no bothy, skimping on life’s little luxuries just isn’t my style. 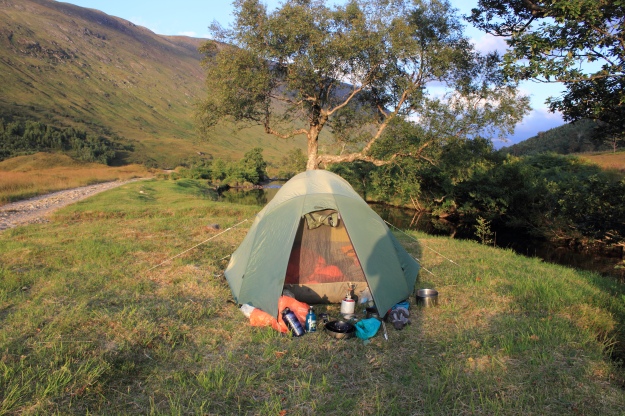 The next day the forecast held true, the west highlands was bathed in glorious late summer sunshine, and there was hardly a breath of wind. My plan for the evening was to stay in Glen Dubh Lighe, but it seemed crazy not to head for the coast. So after a gentle cycle round to the Mallaig road, I did a fifty minute burn up the track to check the condition of the bothy, before getting the train from Glen Finnan to Arasaig. Boy did I make the right decision. Got a tip from a fellow cyclist about where to wild camp, and spent a very relaxed evening watching the sun set over Rum and Eigg. 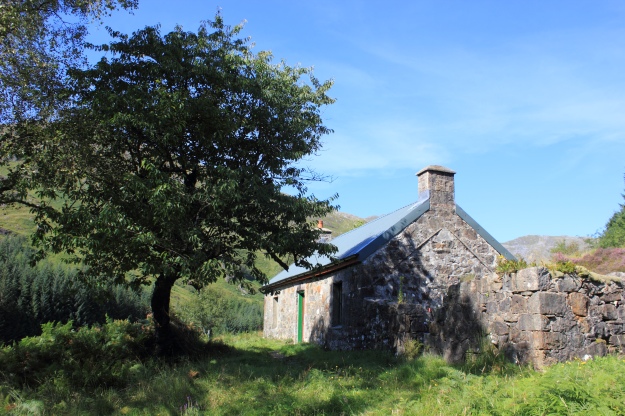 Sun setting over Rum and Eigg 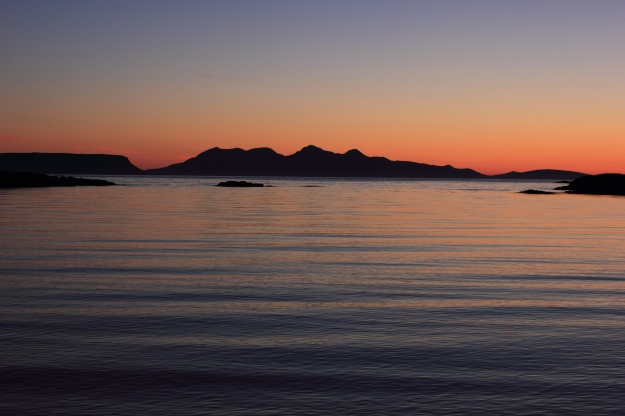 The gloaming from Silver sands 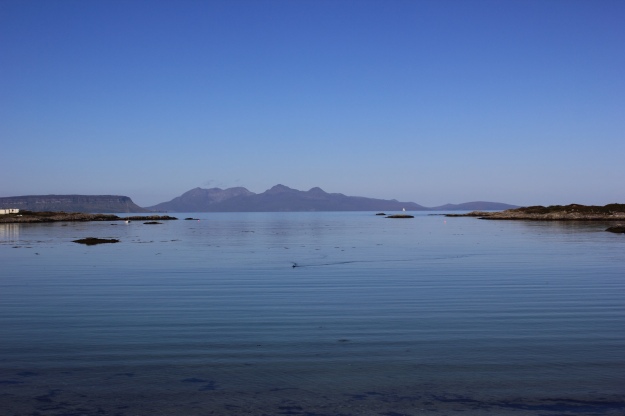 The final leg of research involved a look at a new bothy to me, Luib Chonnal, which is tucked up in a remote part of the Monadhliath, at the watershed of Glen Roy and the River Spey. Had a couple of days in the bothy, and was grateful for an extra night when I didn’t need to pack up and move on in the morning. One of the reasons for staying, was to check out Meall Garbh, another non MBA bothy I’d heard about, but one I knew was pretty definitely open. It turned out to be a great little find, as long as you can ignore the pylons of the Beauly Denny line, which I had already encountered on the other side of the Monadhliath at Easter. 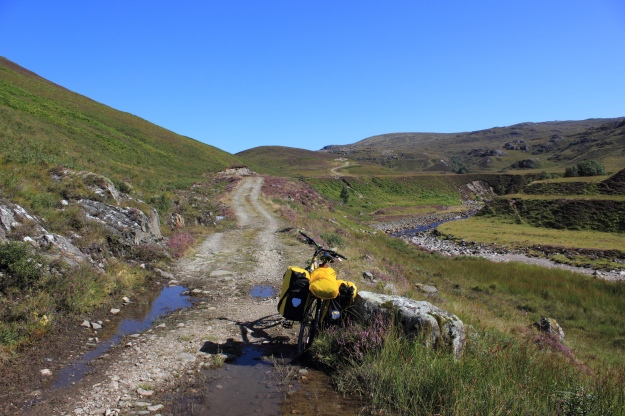 Another bike pose, this time on the track up to the head of Glen Roy

Melgarve Bothy with the new Beauly to Denny power lines behind

Melgarve: not a mention of the new power lines in the bothy book, and once your there they don’t seem to impact

Well, its 5.15, and it seems my decision to get an advanced ticket for the evening train, rather than have to do the hurry up this morning to get the 12 o’clock, has been somewhat vindicated. Nursed one and a half pints in the afternoon, and looking forward to a wee doze as I head back to Glasgow…