To say that John and I are still ultra competitive in the little things in life after all these years, is probably an embarrassment. Though nonetheless true. Monday the weather was kind, and with Phil on board, the musketeers set off to Forest Lodge from the Glen Tilt car park in fine spirits. A little sleep deprived perhaps, but that wasn’t going to slow the pace any, as we had been talking about this trip for so long it was a relief to be finally on our way. The Tarf hotel is one of the most remote of the MBA bothies, stuck out in the middle of nowhere between Beinn Dearg and Beinn Aghlo. The only decision to be made was if we were going to cycle round to stables on the River Tarf, which would involve a mile or so of ascent, or park up at the lodge and hoof over Carn a’ Chlamain. The latter option won out, and for me this would be two ticks in a day, which was the height of efficiency. And more significantly the Tarff is one of the last five MBA’s to visit before I complete the full round. I’m beginning to get finishing fever.

Looking down Glen Tilt on the slope above Forest Lodge

It is a wonderful cycle up Glen Tilt, and we couldn’t believe it was over ten years ago that any of us had been here. Slow on the way up to the summit, but John and I tumbled down to the bothy in quick time, leaving Phil to arrive at a more leisurely pace. Despite my protestations that I couldn’t run any more, my back just not up to snuff,  I pulled out the stops in a burst of energy that really surprised me. I have recently been inspired to get back into the running saddle, and have been loyally doing my exercises, which has definitely helped. Anyway we both coasted to the stream outside the Tarf in a joint finish, and I couldn’t help the impulse to shake hands on the matter. 3k, but it’s a start. I had run in with a mono-pod, and also I discovered my bike pump, though John had stuffed in his jeans, and all the lunch. Score draw.

John working out the best way back to the bikes

The famous AA Hotel sign which gives the bothy its current nomenclature, its actual name is Feith Uaine

So after the necessary photo-shoot, we were off again, deciding against going back up the hill and over, and instead traversing round and back to Glen Tilt via the stables. A long old haul, but satisfying to do the full round. After a brief interlude watching salmon trying to struggle over an imposing set of rapids, it was back on the bikes, and off John and I shot, the irresistible urge to compete undimmed by our advancing years. Not a straight race down the hill, but an unsaid push up every little bit of uphill on the way back to the car park. We swapped victories but on the final final hill John stepped on the gas and my legs just failed me. John made some exclamation which I didn’t quite catch but the gist was ‘loser’, though he was magnanimous enough to remark on my lack of gears as we packed things in the car. Next time.

A last look back to the bothy

The start of the slog back to Forest Lodge 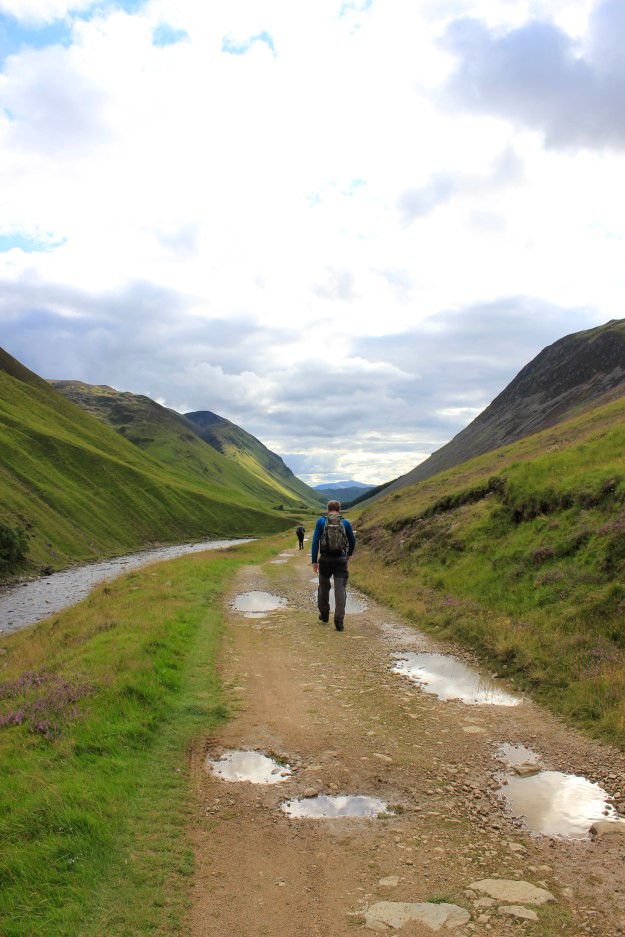